DNA (deoxyribonucleic acid) is the hereditary material found in all living organisms that contain information stored in the form of code. The code is a random combination of four chemical bases: Adenine (A), Thymine (T), Guanine (G) and Cytosine (C). The random combination is somewhat similar in living organism of the same species but varies in different species. Thus, it allows us to differentiate different animal species; for instance, pork and beef according to the differences in their genetic code. A species-species oligonucleotide sequence called 'primer' can be synthesized chemically based on this genetic code. It will bind to genetic code of animal being examined. For example; the primer will be able to bind to porcine if the primer was synthesized based on porcine genetic code. On the other hand, the discovery of a specialized enzyme called 'polymerase, allows amplification of the genetic code of species of our interest with the aid of the species-specific 'primer'.

[75:1] Nay! I call to witness the Day of Resurrection. [75:2] And I do call to witness the self-accusing soul,that the Day pf Judgment is a certainty [75:3] Does man think that We shall not assemble his bones? [75:4] Yea, We have the power to restore his very finger-tips. [75:5] But man desires to continue to send forth evil deeds in front of him.

The verse 75:5 is complied with modern science finding that the patterns of ridges on our finger pads are unique inwhich no two individuals-even identical twins will have fingerprints that are exactly alike. This is also complied with the uniqueness of genetic code stored in the DNA in every animal, human, plant and other living organisms.

Recently, Halal Products Research Institute (HPRI), UPM has developed specialized equipment based on this principle to detect porcine DNA. The equipment was named as 'Hafys' which is an acronym for Halal Verification System meat traces in most things such as food, cosmetics and any other material where extracting DNA is possible.

The equipment technology utilizes a scientific process known as the polymerase chain reaction (PCR) and a device developed in America which is originally used to diagnose illnesses such as malaria, dengue and influenza.The compenants includes in the systems are portable real-time PCR analyzer, disposable test module, lyophilized PCR reagents and DNA extraction kit. The difference between the equipment with typical PCR machine is it contains specific primer and probe for detection of porcine DNA. This equipment also demonstrate many advantages such as it can be a direct (wihtout DNA extraction) or indirect (with DNA extraction) PCR testing, rapid, capable of multiplexing, easy to operate, reliable for animal speciation and also robust. 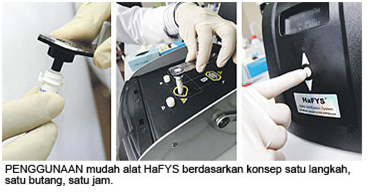 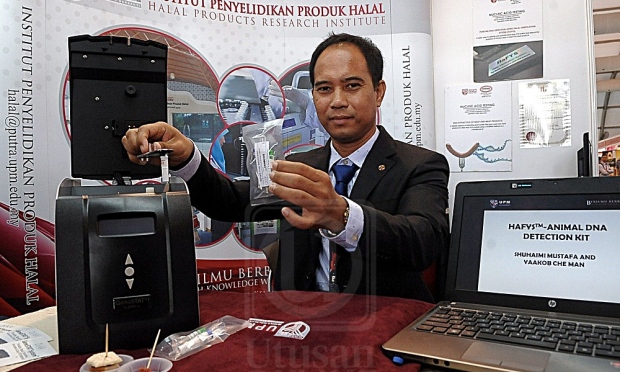